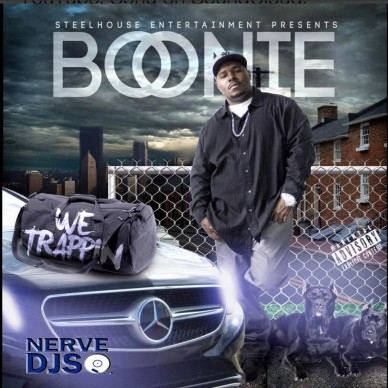 As the middle child of five, and born in the projects to parents who struggled with drug and alcohol addictions, Boonie witnessed many things that no child, or person, should have to be exposed to. Growing up, he did odd jobs and even committed petty crimes to help bring food and a little bit of money into the house. Moving to the Homewood area of Pittsburgh at eleven years old, Boonie’s involvement in the streets got even deeper, which eventually led to doing a bid in juvenile detention and later in life he found himself doing time in adult correctional facilities. Throughout his life, having been a victim of and losing countless friends and relatives to gun violence, Boonie uses these situations, along with his poor upbringing, as motivation and inspiration to create music and achieve his goals.

At age nine, Boonie wrote his first R&B song and then went on to write his first rap song at age eleven. If asked about his style, Boonie will tell you that the words he would use to describe his music are streetwise, flashy, struggle, and lyrical. However, he is a versatile artist who can switch up his style and rap about any topic.

Using his lyrical talent and ability to create concepts, Boonie can make music that he considers to actually be “songs,” instead of just rapping over a beat for the sake of making noise. Additionally, he has a good ear when it comes to production, which allows him to find the perfect beat to use as a supplement to his substance-filled lyrics.
In 2013, Boonie released a CD entitled “Raising the Bar.” His current projects include a CD called “A Few Levels Higher” as well as an EP called “The Intro,” which will feature five singles from the “A Few Levels Higher” album. Looking at his current portfolio, Boonie feels that his singles “We Trappin” and “My Life” are hits. Videos for both of these singles can be found on YouTube. Working hard to get his name out there, Boonie looks forward to working with a number of different artists and taking his talents to the stage any chance he gets.

Pittsburgh’s own Boonie The Kid is emerging on the scene as he strategically builds his Steel House Entertainment Label. Boonie is not only an artist, but is the C.E.O. He recently re-released his single “We Trappin”, which gives a description of the celebratory hustler who is victorious in his quest for success. Learn more about Boonie The Kid and follow his rise to success here: