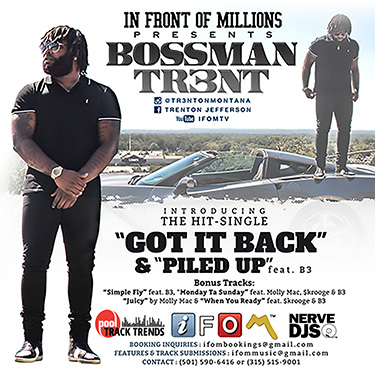 Two things you need to always remember who you are and what you live by. Trent Jefferson, 28 years old knows both and his music speaks through the lines. “Simple Fly” that’s the motto I live by.”- He explains to the world he defines himself as a leader, never has been a follower, it’s always “go hard or go home”.”- Trent Jefferson. Boss Man Tr3nt is the name the versatile artist goes by, the name itself to him defines who is as a person day in and day out, Trent says. “I picked up the pen and paper for the first time three and half months ago with artist B3.” –Trent Jefferson. He hit my line saying “aye Tr3nt what’s up with a verse, I’m about to drop this new hit called “Piled Up”. Trent said, I listened to the beat, start writing, we set up studio time and got in the booth at Green Wood Studios. Dropped the video on YouTube and three days later we hit 3500 views. After seeing the views Boss Man Tr3nt start feeding into an untapped talent that had been just discovered.

Coming from a single parent of four, born and raised in the small town Osceola, Arkansas. Boss Man Tr3nt was the well-rounded one in grade school, talented in sports and excelling A & B student. But soon he decided to take his talents elsewhere and seek another desire in life. Trent was in the 9th grade when his oldest brother Travis gave him $200 for a new pair of shoes and to purchase the new NBA video game that had just came out. Any smart guy invests their money so instead of spending the money….. Trent began his own hustle and went out to get a taste of the streets. Tr3nt learned the many highs and lows in life and always kept Gucci Mane playing to get him through his day. Favorite quote from Gucci mane, “When I ain’t have no money, I still had sauce. If you ain’t got sauce then…ya lost! But you can also get lost in the sauce… Boss Man Tr3nt feels as if he can relate to Gucci Mane as a person and the reality of his lifestyle!
Boss Man Tr3nt is a man of many talents and entrepreneurship, he works hard for what he has. The Boss Man owns a unique clothing store located in downtown Conway, AR named Buttons that provides the latest fashion for men and women. What sets him apart from most, he has his own company named IFOM “In front of Millions” which is his trademark meaning in front of millions of dollars, in front of millions of people and ideas!
Artists that are a part of the movement is Skrooge, Molly Mac, B3 and DrWordUp.The IFOM team has been doing Branding Campaigns from Chicago, Indianapolis, Cleveland, Memphis, Mississippi, Oklahoma, Kansas and all the way to Dallas. Rubbing elbows, learning the markets, and trying to figure out who really rocking with us, says Tr3nt. At first, we were just writing and rapping until Claude T. Bates came along. Bates? “With his credentials and background we had no choice but to add him to the team, thanks to him we been sky rocketing every since”, Bossman Tr3nt. IFOM has been working hard, with the mixtape release party approaching soon and bookings being booked every weekend, time is money. Tr3nt’s first mixtape “Riich Habbiit$” is set to be released January 18, 2016 MLK birthday. The rate of IFOM movement is nonstop to the top!